Dr. Chris King was invited to present his two-generation findings to the audience of the ACT Workforce Summit.  The event, held at the Hyatt Regency in Austin, TX, from November 8-10, 2017, brought together workforce professionals, economic developers, educators, industry associations, employers, and ACT Work Ready Community leaders to help strengthen the nation’s employment base.  You can view his presentation here. 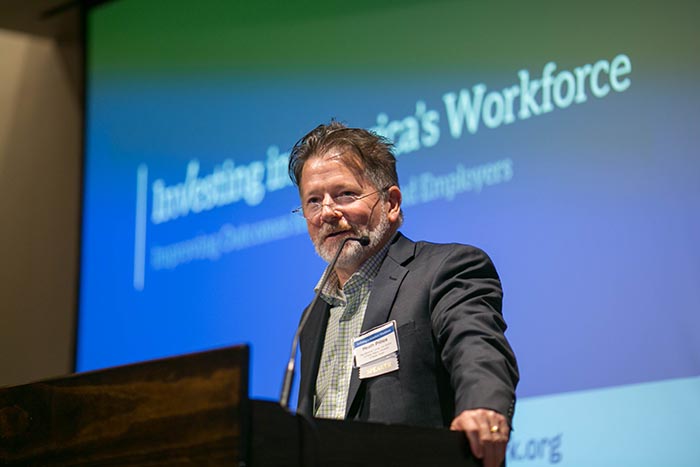 (Above) Heath Prince, director of the Ray Marshall Center at the LBJ School, moderated a panel on investing in research.

A stronger workforce supports a stronger economy. The Oct. 4-6 conference at UT Austin, “Investing in America’s Workforce: Improving Outcomes for Workers and Employers,” featured all 12 of the Federal Reserve System’s regional banks and the Board of Governors, and generated national conversation about how to leverage community resources, policy and social investments to build connections between businesses and workers.

The capstone conference was hosted by the Federal Reserve System in collaboration with the LBJ School of Public Affairs and the Ray Marshall Center at The University of Texas at Austin, the John J. Heldrich Center for Workforce Development at Rutgers University and the W.E. Upjohn Institute for Employment Research. 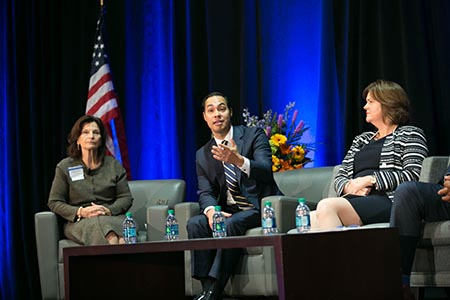 (Above) Dean Angela Evans, left, moderates the panel, “Making the Connection to Work,” including panelists Julián Castro (center) of the LBJ School and Carol Naughton (right), president of Purpose Built Communities. Other panelists included Jim Gibbons, president and CEO of Goodwill Industries International, Michael Harreld, special advisor to the chairman at PNC, and Ryan Haygood, president and CEO of the NJ Institute for Social Justice.

Several LBJ students had an opportunity to attend the conference as well. They covered the event extensively through social media. Anna Crockett (MPAff ’18) is interested in economic policy, so she was interested in attending to get a nationwide perspective on job creation.  “My best experience was seeing Dean Evans and Julian Castro on a great panel on Friday morning. I felt a lot of LBJ pride at that moment! It was also great to see the focus on policy. I think the policy element really pushed people to speak in terms of benchmarks and tangible outcomes,” Crockett said.

“It was great to see the focus on policy. I think the policy element really pushed people to speak in terms of benchmarks and tangible outcomes.” —Anna Crockett, MPAff ’18

Fellow student Natasha Bylenok (MPAff ’18), whose interest in labor policy aligned closely with the conference mission, said, “Panelist Brendan Martin [Executive Director of Working World] made the point, ‘We’ve organized people to serve the economy instead of organizing the economy to serve people.’ I think he and the other panelists gave a powerful reminder of the human element of economics and labor policy.”

The event opened with a reception hosted by the LBJ School and the Ray Marshall Center on Wednesday evening at UT’s Blanton Museum of Art. Dean Evans was joined by UT Austin President Gregory Fenves and Austin Mayor Steve Adler to welcome over 300 guests to the campus and the city. 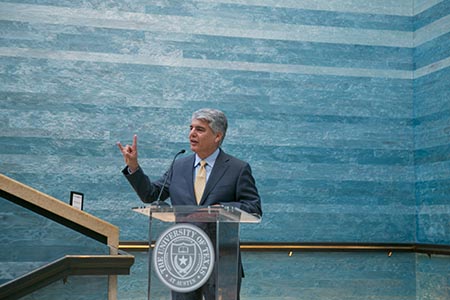 (Above) UT Austin President Gregory Fenves speaks at the reception for attendees, held the first evening of the conference.

Rooted in the idea that our country can only reach its economic potential through strong alignment between employer needs and a skilled workforce, the mission of this cross-sector collaboration was to: Hosted by the Federal Reserve System in collaboration with the John H. Heldrich Center for Workforce Development at Rutgers University, the Ray Marshall Center for the Study of Human Resources at The University of Texas, the Lyndon B. Johnson School of Public Affairs at The University of Texas and the W.E. Upjohn Institute for Employment Research. It is the capstone conference to an ongoing workforce development initiative. Visit www.investinwork.org to learn more about the other components of the initiative. RMC Senior Research Scientist Chris King, along with Dr. Burt Barnow from the George Washington University, traveled to the Czech Republic to present research on evaluating labor policies in the United States.  The workshop, held in Prague from June 26-30, 2017, was hosted by the International Labour Organization.  It is the third in a series of global workshops on labor administration involving policymakers, practitioners, and researchers sponsored by the ILO and cosponsored by RMC.  The first was held in Turin, Italy, in 2013 and the second in Prague in December 2015.  A fourth is being planned for 2019 in conjunction with the Centenary Celebration of the ILO.  You can view the presentation here. On April 26, 2017, Heath Prince attended the “Improving Educational Experiences and Outcomes for Young Men of Color” meeting hosted by the Coalition of Schools Educating Boys of Color (COSEBOC) and the Executives’ Alliance for Boys and Men of Color.  The meeting, held at the Etter-Harbin Alumn Center on the University of Texas at Austin campus, convened local and national experts and focused on education policy and practice as it relates to boys and young men of color.  The meeting was part of the 2017 Annual Gathering of Leaders: Austin, TX, also held on campus from April 26-28th, with this year’s theme being Boys and Young Men of Color: Innovators, Creators, and Game Changers.  You can read more about the meeting here and the conference here.